Our Products
Discover Our New and
Exciting Innovations 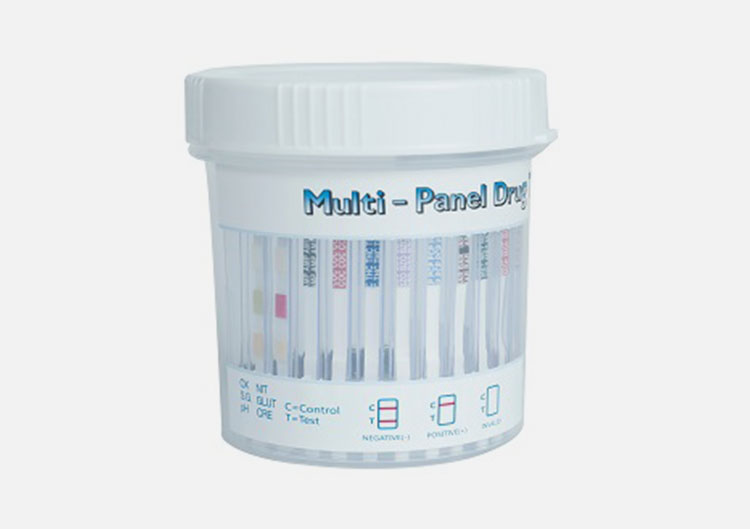 Instructions for use for testing of any combination of the following drugs:

immunoassay for the qualitative detection for the drugs and drug metabolites in human urine. The detection limits cut-off concentrations of this test are as below list. 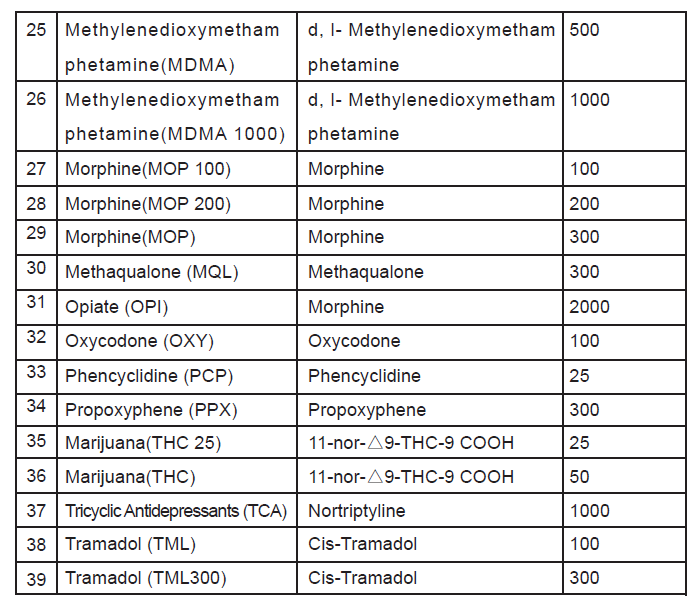 Special condition for use statement(s)

Configurations of multi-drug test kit come with any combination of the above listed drug analytes with or without specimen validity test (S.V.T.). This assay provides only a preliminary analytical test result. A more specific alternative chemical method must be used to obtain a confirmed analytical result. Gas chromatography/Mass spectrometry (GC/MS) is the preferred confirmatory method. Other chemical confirmation methods are available. Clinical consideration and professional judgment should be applied to any drug of abuse test result, particularly when preliminary positive results are used.

Each S.V.T. strip contains chemically treated reagent pads. Three to five minutes following the activation of the reagent pads by the urine sample, the colours that appear on the pads can be compared with the printed colour chart card. The colour comparison provides a semi-quantitative screen for any combination of oxidants/pyridinium chlorochromate (PCC), specific gravity, pH, nitrite, glutaraldehyde and creatinine in human urine which can help assess the integrity of the urine sample.

The multi-drug test kit is a competitive binding immunoassay in which drugs and drug metabolites in a urine sample compete with immobilized drug conjugate for limited labeled antibody binding sites. During testing, a urine specimen migrates through the test device by capillary action. If the drug or drug metabolite concentration in the specimen is below the cut-off level, the anti-drug antibodies in colloidal gold particles will bind to the drug antigens coated in the test line of the nitrocellulose membrane to form a T line which indicates a negative result. If the concentration of drug in the urine specimen is above the cut-off level, it will bind with antibodies conjugated with colloidal gold particles, so that no T line will be developed in the test region, which indicates a positive result. A control band with a different antigen/antibody reaction is added to the immune-chrom atographic membranestrip at the control region(C) to indicate that the test has performed properly. This control line should always appear regardless of the presence of drug or drug metabolite. If the control line does not appear the test device should be discarded.

Adulteration is tampering of a urine specimen with the intention of altering the test results. The use of adulterants can cause false negative results in drug tests either interfering with test and/or destroying the drugs present in the urine. Dilution may also employed in an attempt to produce false negative results. One of the best way to test for adulteration or dilution is to determine certain urinary characteristics such as pH and specific gravity(SG) and Creatinine(GRE) and to detect the presence of Oxidants/Pyridinium Chlorochromate (OX/PCC), Nitrite(NIT), Glutaraldehyde(GLUT) in urine.

• Oxidants/PCC (Pyridinium chlorochromate) tests for the presence of oxidizing agents such as bleach and hydrogen peroxide. Pyridinium Chlorochromate is a commonly used

adulterant. Normal human urine should not contain oxidants or PCC.

Values outside this range may be the result of specimen dilution or adulteration.

• pH tests for the presence of acidic or alkaline adulterants in urine. Normal pH levels

should be in the range of 4.0 to 9.0. Values outside of this range may indicate the sample

• Nitrite tests for commonly used commercial adulterants such as Klear or Whizzies. They

work by oxidizing the major cannabinoid metabolite THC-COOH. Normal urine should contain no trace of nitrite. Positive results generally indicate the presence of an adulterant.

• Glutaraldehyde tests for the presence of an aldehyde. Adulterants such as Urin Aid

and Clear Choice contain glutaraldehyde which may cause false negative screening

results by disrupting the enzyme used in some immunoassay tests.2 Glutaraldehyde is

not normally found in urine; therefore, detection of glutaraldehyde in a urine specimen is generally an indicator of adulteration.

• Creatinine is a waste product of creatine, an amino acid contained in muscle tissue

and found in urine. A person may attempt to foil a test by drinking excessive amounts of

water or diuretics such as herbal teas to “flush” the system. Creatinine and specific gravity are two ways to check for dilution and flushing, which are the most common mechanisms used in an attempt to circumvent drug testing. Low creatinine and specificgravity levels may indicate dilute urine. The absence of creatinine (< 5 mg/dL) is indicativeof a specimen not consistent with human urine.

• For in vitro diagnostic use only.

• For laboratory professional use.

• Do not use after the expiration date indicated on the package. Do not use the test if the foil pouch is damaged. Do not reuse tests.

way as an infectious material.

• Avoid cross-contamination of specimens by using a new specimen collection

container and specimen pipette for each specimen obtained.

• Read the entire procedure carefully prior to performing any tests.

• The used testing materials should be discarded in accordance with local, state

to the manufacturer and the competent authority of the Member State.

• The test is stable through the expiration date printed on the sealed pouch.

• The test must remain in the sealed pouch until use.

• After opening the sealed pouch, use the test as soon as possible within 60 minutes.

• Do not use beyond the expiration date.

• Fresh urine specimen must be collected in a clean and dry container. Urine collected

at any time of the day may be used. Urine specimens exhibiting visible particles should be centrifuged, filtered, or allowed to settle to obtain clear specimen for testing.

• Perform the testing immediately after the specimen collection. Do not leave the specimens at room temperature for prolonged periods. Specimens may be stored at 2-8°C for up to 48 hours.  For long term storage, specimens should be kept below -20°C.

• Bring specimens to room temperature prior to testing. Frozen specimens should be

thawed and mixed well before testing. Avoid repeated freezing and thawing of specimens.

• Sealed pouches each containing a test cassette/panel/cup, a desiccant

Materials required but not supplied

Equilibrate the tests, urine specimens, and/or controls to room temperature (15-25℃) prior to testing.

Remove the test from the sealed pouch and use it as soon as possible.

• Start the time and wait for the colored line to appear.

• Read the test results at 5 minutes. Do not read the results after 10minutes.

• Place the test panel on a flat dry surface, start the time and wait for the colored

line(s) to appear. Read the test results at 5 minutes. Do not read the results after 10minutes.

•Collect specimen in the cup and secure the cap tightly.

•Place the cup on a flat surface.

•Peel off the label on the cup to view the results.

•Read the test results at 5 minutes. Do not read the results after 10minutes.

See the color chart for interpretation. If the result indicates adulteration, do no interpret

the drug test result and either retest the urine or collect another specimen.

Two distinct colored lines appear. One line should be in the control line region (C) and

another line should be in the test line region (T).It indicates that the drug concentration in the urine specimen is below the designated cut-off level for the specific drug.

positive result. The positive result indicates that the drug concentration in the urine specimen is above the designated cut-off level for that specific drug.

(Please refer to the color chart)Semi-quantitative results are obtained by visually comparing the reacted color blocks on the strip to the printed color indicator on the color chart. No instrumentation is required.

1.The intensity of the color in test region (T) may vary depending on the concentration

of aimed substances present in the specimen. If the color in test region (T) is very weak, indicating that the drug concentration in the urine specimen is close to the cut-off concentration, then the specimen needs to be detected repeatedly or confirmed by other more accurate method.

• External controls are not supplied with this kit. It is recommended that positive and negative controls be tested as a good laboratory practice to confirm the test procedure and to verify proper test performance.

1.The multi-drug test kit provides only a qualitative, preliminary analytical result. A more specific chemical method must be used to obtain a confirmed result. Gas chromatography/Mass spectrometry (GC/MS) is the preferred confirmatory method.

2.It is possible that the technical or procedural errors, as well as other interfering substances in urine specimen may cause erroneous results.

3.The assay is designed for use with human urine only.

4.Adulterants, such as bleach and/or alum, in urine specimens may produce erroneous results regardless of the analytical method used. If adulteration is suspected, the test should be repeated with another urine specimen.

5.A positive result does not indicate level of intoxication, administration route or

6.A negative result may not necessarily indicate drug-free urine. Negative results can be obtained when drug is present but below the cut-off level of the test.

7.Test does not distinguish between drugs of abuse and certain medications.

8.Certain foods or food supplements may cause a false positive result.

1.The adulteration test with this product is mean to aid in the determination of abnormal specimens. While comprehensive, these tests are not mean to be an “all inclusive” representation of possible adulterants.

2.OX/PCC: Normal human urine specimen should not contain Oxidants and Pyridinium. Chlorochromate. The presence of high level of antioxidants in specimen, such as ascorbic acid, may result in false negative for the OX/PCC strip

5.GLUT: Glutaraldehyde is not normally found in urine, however, certain metabolic abnormalities such as ketoacidosis (fasting, uncontrolled diabetes or high-protein diets) may interfere with test result.

6.GRE: Normal creatinine levels are between 20 and 350 mg/dL. Under rare

The accuracy of the Multi-drug One Step Test Kit was compared and checked against commercially available tests with a threshold value at the same cut-off levels. Urine samples taken from volunteers claiming to be non-users were examined under both tests. The results were >95% in agreement.

To test the specificity of the test, the test kit was used to test various drugs, drug metabolites and other components that are likely to be present in urine. All the components were added to drug-free normal human urine. These concentrations (ng/mL) below also represent the limits of detection for the specified drugs or metabolites.

Contact Us Now
Send your inquiry. Get a free quote. Increase your sales!
Submit